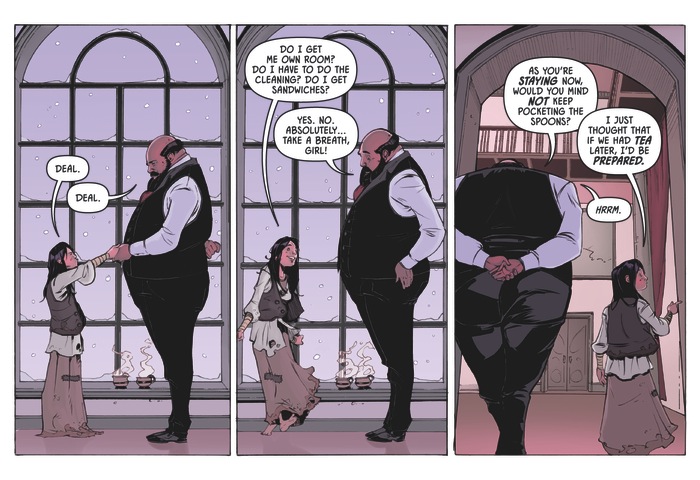 We’re delighted to announce Delcourt will be publishing the French language edition of Porcelain: A Gothic Fairy Tale, by Benjamin Read and Chris Wildgoose, which is scheduled for a September 2014 release.

As the leading independent comic publisher in France, and with a strong record of adapting US comics, Delcourt’s passion and expertise are a natural fit for the French language editions of Porcelain and its sequels.

As part of the three book deal, two sequels are currently in development; with release of the French editions scheduled for 2015 and 2016. Tentatively subtitled BONE CHINA and IVORY TOWER, the sequels will explore the aftermath of the first book and the consequences of Child’s choices.

Porcelain first came to the attention of Delcourt at the Thought Bubble 2012 Comic Art Festival in Leeds, when Thierry Mornet, Delcourt’s Editor in Chief, discovered Benjamin Read and Chris Wildgoose’s work from a free preview published by Improper Books.

Speaking about signing the deal, writer Benjamin Read said, “The look of Porcelain was very much inspired by the aesthetic of the European comics movement, so it’s an absolute joy for it to go full circle and be published in France, particularly by such an established and renowned company as Delcourt.”

“The intention with the next two books is to move beyond the normal fixed frame of the fairy tale and instead show a whole life. In the second book, BONE CHINA, she will be Lady. In the third book, IVORY TOWER, she will be Mother (but not perhaps how you think). We will follow Child as she grows into a woman; living out her grand, terrible, and, ultimately, legendary life.”

“I’m really excited that we’ve teamed up with Delcourt. I’m a big fan of the European market and Delcourt without a doubt brings out the best of the European comics. It’s a total honour and privilege to join their ranks,” said Chris Wildgoose.

“It has also given us the chance to jump back into the world of Porcelain for a second and a third time! It’s going to be every bit as magical and brutal as the first book and allow fans to take a deeper look into the city.”

Written by Benjamin Read and illustrated by Chris Wildgoose, with colours by André May and lettering by Jim Campbell, Porcelain: A Gothic Fairy Tale is set within a world that’s a darkly magical echo of our own. It follows the urchin, Child, as she steals into the Porcelain Maker’s garden. Captured by his alchymical porcelain automata, she charms her way into his life and he becomes the father she never had. He has only one rule; she must never, ever, open the workshop door.

You can also download a PDF version of Porcelain: A Gothic Fairy Tale 12 page preview.